A Witness to Quaker Testimonies 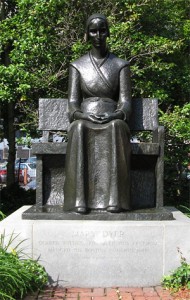 The sculpture of Mary Dyer represents the Quaker ideal of committed action grounded in quiet and worship.  Her presence at the entrance of the building silently conveys to all who pass through Friends Center’s doors that it is a place of both conviction and contemplation.

In the 1650s Quakers were banished from the Massachusetts Colony as heretics.  Mary Dyer’s conscience led her to defy the unjust law.  Three times she was arrested and banished.  When she returned the fourth time she was condemned to death.  Given the opportunity to repent and thus not be hanged she responded, “Nay, I came to keep bloodguiltiness from you, desireing you to repeal the unrighteous and unjust law made against the innocent servants of the Lord. Nay, man, I am not now to repent.”  She was hanged in Boston on June 1, 1660, a martyr for religious freedom.

The statue at Friends Center is an identical casting of a statue that sits on the grounds of the Massachusetts State House, across from Boston Common.  It was created in 1959 by Quaker sculptor Sylvia Shaw Judson in accordance with a bill of the General Court of Massachusetts that authorized “the construction and erection of an appropriate statue of Mary Dyer, who was hanged on Boston Common in the year 1660 because she chose the death penalty rather than abandon the principles of freedom of speech and conscience.”

In September 2015, the Washington Post‘s Acts of Faith blog wrote about the statue in the context of Pope Francis’s visit to Philadelphia. Read the piece here.

We remain CLOSED Saturdays except by prior reservation for events.

Central Philadelphia Monthly Meeting (CPMM) of Friends (Quakers) has resumed in-person meeting for worship on Sundays at 11 AM, with an option for online participation. Consult the CPMM website or contact the Meeting office for details.